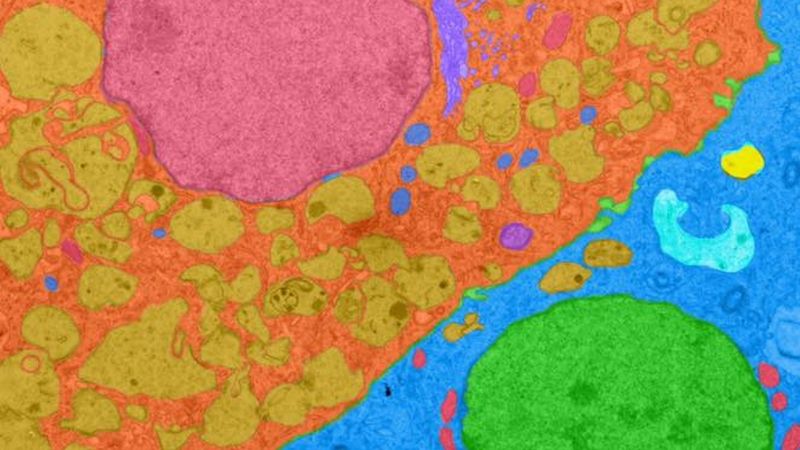 Colorized photomicrograph showing a macrophage (orange cell with large red nucleus in center of image) interacting with a fibroblast (blue cell with green nucleus at bottom right) in a mouse heart. Johns Hopkins Medicine researchers have shown that a protein, interleukin 17-A, can prevent critical monocyte cells from differentiating into lymphocytes that protect cardiac muscle from inflammation and in turn, lessen the threat of heart failure. Credit: X. Hou and D. Cihakova, Department of Pathology, Johns Hopkins University School of Medicine

On an ice hockey team, the players all start off with identical uniforms, skates and a stick. But if you take one of them, add padding, a glove, and a mask; and switch the stick to one with a larger blade, then you get a goalie. Now, the player has morphed — or differentiated — into one with a specific function: protect the goal from invading pucks.

Differentiation of cells in the human immune system is critical to give them the ability to perform specific tasks that, like a biological goaltender, help protect the body from foreign invaders. A new study, led by researchers at Johns Hopkins Medicine, provides evidence that when circulating anti-inflammatory white blood cells known as monocytes fail to properly differentiate into macrophages — the cells that engulf and digest cellular debris, bacteria and viruses — certain forms of heart disease may result.

The research, reported in a recent issue of the journal Cell Reports, shows the presence of a specific protein prevents this monocyte-to-macrophage transition from occurring in the heart. This triggers a cascade of events that can cause heart muscle inflammation, or myocarditis; remodeling of the cardiac muscle structure; enlargement of the heart, or dilated cardiomyopathy; and weakening of the organ’s ability to pump blood. Eventually, this can result in heart failure.“The good news, also shown by our study, is that blocking a key protein, known as interleukin-17A or IL-17A, permits the differentiation of anti-inflammatory monocytes, promotes healthy cardiac function, and allows the newly created macrophages to protect, rather than attack, cardiac muscle,” says Daniela Cihakova, M.D., Ph.D., associate professor of pathology at the Johns Hopkins University School of Medicine and the senior author of the paper.

In previous live mouse and “test-tube” laboratory studies, Johns Hopkins Medicine researchers determined that IL-17A stimulates spindle-shaped cardiac cells called fibroblasts to release a mediator that causes one type of monocyte, an inflammatory cell known as Ly6Chi to accumulate in greater numbers in the heart than the anti-inflammatory type known as Ly6Clo. Fibroblasts help direct and maintain the structural, biochemical, mechanical and electrical properties of the myocardium, the muscle cells of the heart that beat continuously from before birth until death. Fibroblasts also are involved in replacing these cells with scar tissue once they are damaged by disease or a heart attack.

The researchers found that another function of fibroblasts — mediating the immune response during myocarditis — is affected by IL-17A in a way that leads to cardiac fibrosis (the overproduction of collagen, a fibrous tissue normally responsible for wound repair, which stiffens cardiac muscle and decreases its ability to pump blood) and eventually, dilated cardiomyopathy. However, the mechanism behind the disruption remained unclear.

To figure it out, the researchers conducted experiments using a mouse model of human myocarditis. Known as experimental autoimmune myocarditis, or EAM, it is created by immunizing mice with cardiac myosin, a protein that normally regulates heart muscle contraction, but in this case, triggers the immune system to attack the cardiac muscle cells and produce inflammation.

First, Cihakova and her colleagues wanted to determine the source of the macrophages seen in the hearts of mice during myocarditis; whether they were circulating Ly6Clo and Ly6Chi monocytes from the bone marrow that differentiated in the heart to macrophages or mature macrophages already residing there. They achieved this by surgically joining two mice — each with a different immune cell biomarker — so that they shared a single circulatory system. EAM was induced in one of the conjoined pair and then the macrophages in the hearts of both were examined after myocarditis set in. Macrophages from both joined mice were found in the heart of the one with EAM, indicating that they were circulating and not in place before the surgery.

Based on their previous studies with IL-17A, the researchers focused further on this protein as the potential catalyst for fibroblast-directed disruption of monocyte-to-macrophage conversion. Returning to a test tube experiment, they grew both types of monocytes with either cardiac fibroblasts alone or cardiac fibroblasts that had been stimulated with IL-17A. After nearly a week, Ly6Clo monocyte differentiation was completely shut down while there was little effect on Ly6Chi monocyte maturation into macrophages.

The researchers then verified their findings in living animals by first, separately injecting Ly6Clo and Ly6Chi monocytes into the hearts of mice with EAM. Previously, they had found that EAM results in high levels of IL-17A in the heart. What they observed in this test was the exact same pattern of differentiation as in the test tube trial; none for Ly6Clo monocytes and little impact on Ly6Chi cells.

However, Ly6Clo differentiation to macrophages did occur in the hearts of IL-17A “knockout” mice, a strain bred without the gene to manufacture the interleukin protein.

Taking their investigation of the IL-17A/fibroblast link to the disruption of differentiation one step further, Cihakova and her colleagues focused on a finding from an earlier study of IL-17A.

“We knew that cardiac fibroblasts stimulated by IL-17A are potent producers of a protein, granulocyte-macrophage colony-stimulating factor, or GM-CSF, that is a cytokine, a molecule that evokes an immune response and inflammation in tissues,” says Xuezhou (Snow) Hou, Ph.D., the lead author of the Cell Reports paper and formerly at the Johns Hopkins Bloomberg School of Public Health.

“So, thinking that GM-CSF might be the key to why differentiation is disrupted, we added antibodies against GM-CSF to a mix of cardiac fibroblasts, IL-17A and Ly6Clo and found that we could counter IL-17A’s influence on the fibroblasts, and in turn, restore normal Ly6Clo monocyte-to-macrophage differentiation,” she said.

“We learned that IL-17A signaling through the fibroblasts increases the shedding of receptors from the surface of Ly6Chi-derived macrophages in the heart,” Cihakova explains. “These receptors produce an enzyme, myeloid-epithelial-reproductive tyrosine kinase, or MerTK, that helps direct the macrophages to engulf dead heart cells and remove them. If this doesn’t happen effectively — as when IL-17A leads to a decreased amount of MerTK — the chemical contents of uncleared dead cells can spill into the heart and inflame the cardiac muscle.”

The researchers also showed that MerTK levels were significantly lower in cardiac biopsies of human myocarditis patients when compared with heart tissue in persons with myocardial ischemia, a condition that occurs when blood flow to the heart is reduced.

“This is important because a measure of the MerTK level in circulating blood might one day be used as a diagnostic biomarker to distinguish between myocarditis and ischemia since the two exhibit very similar symptoms,” Hou says.

Cihakova and Hou caution that further studies and eventually, clinical trials, will be needed before IL-17A or GM-CSF could be considered as potential therapeutic targets for drugs that can prevent myocarditis.

The authors report no conflicts of interest for this study.