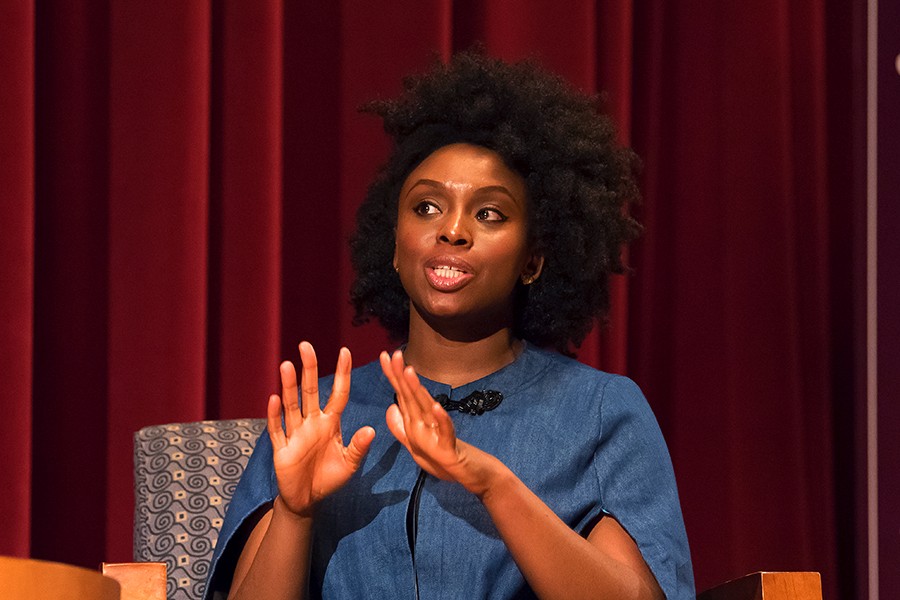 Chimamanda Ngozi Adichie, appearing before a packed house at Johns Hopkins University’s Shriver Hall on Wednesday night, challenged the ideal of American optimism in the face of what she believes is a time of anxiety.

The prominent writer and feminist activist said she’s been struck, post-inauguration, with “how really fragile America’s conception is of its own self,” with new uncertainty looming over the security of its core institutions.

“IF YOU’RE GOING TO CREATE, FAILURE HAS TO COME—NOT JUST FAILURE, BUT DROUGHT.”

“Growing up in Nigeria, political uncertainty is familiar to me,” Adichie said, though until recently, she said, she had taken comfort in the notion that “America is a place where that didn’t exist.”

But this “undercurrent of assuming things will be OK,” she said—”I think it’s a dangerous assumption to make.”

Though the topic of the current political climate featured prominently in the event, Adichie’s conversation with JHU Africana Studies professor Shani Mott also touched on a number of other personal topics, including why Adichie avoids Twitter and the humbling experience of having her first book rejected in her early 20s.

“I think after this I won’t need to see a therapist,” she joked.

The author of the award-winning Americanah (2013) visited Johns Hopkins as part of the student-run Foreign Affairs Symposium. Adichie is a graduate of the JHU’s Writing Seminars program, from which she earned her master’s degree in 2004. (The university also awarded her an honorary degree last May.)

Beyond her writing, which includes six books along with numerous short stories and essays for publications such as The New Yorker, Adichie has earned a platform recently as a poised activist and speaker after two TEDx talks that went viral. Her 2012 talk, “We Should All Be Feminists”, became a familiar pop culture reference when Beyoncé excerpted portions of it for the song “Flawless.”

Last night Mott asked Adichie about her experience during a tense BBC interview shortly after the Nov. 8 election of Donald Trump.

In her post-mortem of that interview on Facebook, Adichie wrote that she’d felt “ambushed” when she learned at the last minute she’d be facing a Trump-supporting editor of a conservative magazine, in a “deliberately adversarial” debate designed to create “good television.”

“I wanted to walk away, but decided not to,” Adichie wrote, because “I did want to talk about the election, which I had experienced in a deeply personal way.”

Last night, Adichie said that although she’s interested in learning from other political viewpoints—and for that reason “subscribes to some publications that might surprise you”—she shuts down on “conversations that involve dehumanizing people. 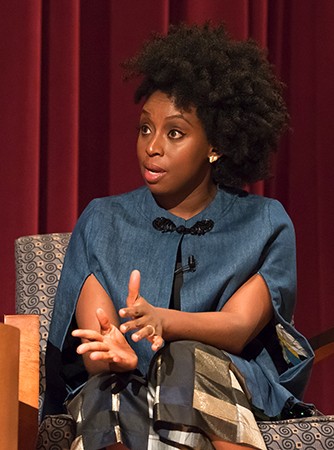 “I felt Trump ran a campaign that dehumanized people,” she said. “I just don’t think there’s anything to engage with.”

Though Adichie said she felt “anxiety in my soul” over the election result, she acknowledged the chords of economic disenfranchisement that contributed to it. “If everything else has failed and someone says a magical wand will fall down from the sky and fix everything,” people want to believe that, she suggested.

When the conversation turned to race, Adichie spoke of her own process of redefining her “blackness” upon coming to the U.S. for college and finding prejudices and cultural nuances she’d never experienced in Nigeria. She splits her time between the two countries—she is a Nigerian citizen but has permanent resident status in the U.S.

“Becoming black in America is a choice” to reckon with the complications of that identity, she said. Though part of that is inevitable, because “the world looks at you as black,” she said, there’s also a “political choice” to be made.

“I’ve chosen to identify with blackness in America,” Adichie said.

When Mott mentioned Adichie’s use of Twitter, the writer quickly confirmed that any tweets appearing under her name are not her own.

“They need to stop, it’s just ridiculous,” she said of the fraudulent accounts.

Adichie said that she’s wary of social media due to its tendency to invite a “casual crossing of personal boundaries” between strangers. “I don’t do well with that,” she said.

Asked to address the more difficult aspects of writing, Adichie emphasized the necessity of failure.

“If you’re going to create, failure has to come—not just failure, but drought,” she said, sharing the rejection she faced with her first attempt at a novel, never published.

But, “there’s a sense in which I’m so grateful that happened,” she said, in that she approached her next novel—2003’s Purple Hibiscus, her first published—as “less smug, less sure.”

Adichie said writing is the most important part of her life.