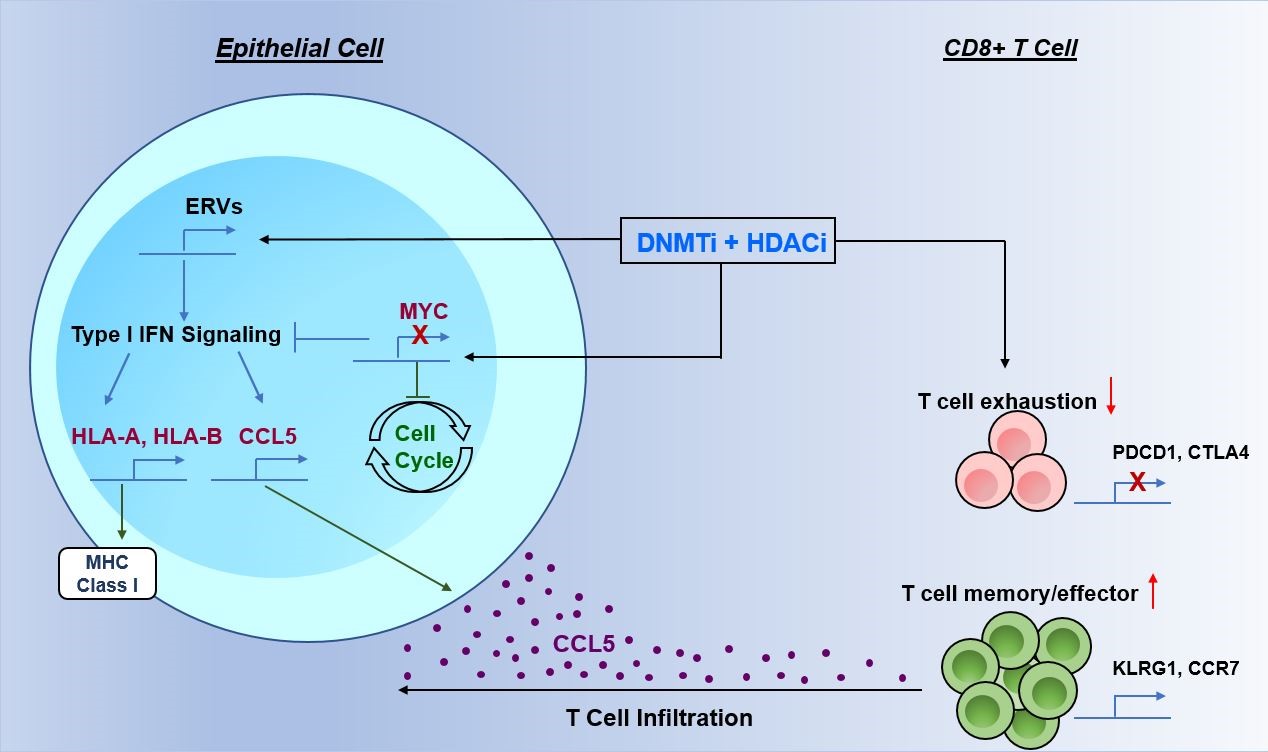 During the study, published Nov. 30, 2017, in the journal Cell, a team of researchers led by graduate student Michael Topper; research associate Michelle Vaz, Ph.D.; and senior author Stephen B. Baylin, M.D., combined a demethylating drug called 5-azacytidine that chemically reignites some cancer suppressor genes’ ability to operate, with one of three histone deacetylase inhibitor drugs (HDACis). The HDACis work against proteins called histone deacetylases that are involved in processes, such as cell copying and division, and can contribute to cancer development. The combination therapy triggered a chemical cascade that increased the attraction of immune cells to fight tumors and diminished the work of the cancer gene MYC. Based on these findings, investigators have launched a clinical trial of the combination therapy in patients with advanced nonsmall cell lung cancer.

“In our study, the two-drug epigenetic therapy combination worked exceedingly well, even before putting in the immune checkpoint inhibitors,” Baylin says. “In animal models of lung cancer, the two agents either prevented cancer from emerging or blunted the effects of more aggressive cancers. In both scenarios, a large component of the results involved an increase in immune recognition of the tumors.”

In a series of experiments, researchers studied the combination of 5-azacytidine with the HDACis entinostat, mocetinostat or givinostat in human cancer cell lines and in mouse models of nonsmall cell lung cancers. The treatments were found to alter the tumor microenvironment. In cancer cell lines, 5-azacytidine worked against the cancer gene MYC, causing down regulation of the entire MYC signaling program. Adding the HDACis further depleted MYC, and together the drugs subsequently caused actions that prevented cancer cell proliferation, simultaneously attracted more immune system T cells to the area of the tumor and activated these cells for tumor recognition.

In mouse models, the strongest response was observed when using 5-azacytidine plus givinostat. In one mouse model with a mutant form of nonsmall cell lung cancer, this drug combination given for three months yielded prevention of benign precursor tumors from becoming cancers and caused 60 percent reduction of overall area of benign tumor appearance in the lungs. By contrast, a group of mice with the same form of lung cancer that were given a mock treatment universally developed large, cancerous lesions in the lungs.

Baylin and colleagues at Memorial Sloan Kettering Cancer Center in New York and Fox Chase Cancer Center in Philadelphia have started a phase I/Ib clinical trial to evaluate if giving mocetinostat with a 5-azacytidinelike drug called guadecitabine can boost immune checkpoint therapy responses in patients with advanced, nonsmall cell lung cancers. The trial is part of the Van Andel Research Institute–Stand Up To Cancer Epigenetics Dream Team and is funded by Merck through the Stand Up To Cancer (SU2C) Catalyst program, an initiative led by SU2C to bring innovative cancer treatments to patients quickly. Matthew Hellmann, M.D., an author on the paper, will lead this trial at Memorial Sloan Kettering, and Jarushka Naidoo, M.B.B.Ch., assistant professor of oncology, will lead at Johns Hopkins. For more information, click here.